“UP, UP WITH THE FAIR FOOD NATION!! DOWN, DOWN WITH THE EXPLOITATION!!”

Join DC Fair Food as we host the premiere screening of Food Chains, the first ever documentary featuring the Coalition of Immokalee Workers!

Co-produced by Eva Longoria and Eric Schlosser (producer of Food, Inc. and author of Fast Food Nation) and narrated by Forest Whitaker, the film features the CIW’s Campaign for Fair Food as the long-sought solution to the exploitation faced by farmworkers in the US.

“Food Chains” reveals the complicity of the supermarket industry in the abuse taking place in their supply chains, and calls on viewers to demand that food retailers like Publix and Wendy’s use their market power to eradicate farmworker exploitation by joining the CIW’s groundbreaking Fair Food Program.

There will be several screenings through the entire weekend before Thanksgiving, so to attend at least one to help us raise the profile of this groundbreaking campaign!

WHAT: Food Chains opening weekend
WHERE: West End Cinema, 2301 M St NW, Washington, D.C.
WHEN: Nov 21st, 22nd, 23rd – specific screening times listed below
WHY: to support the Coalition of Immokalee Workers and their Fair Food Program!
HOW: buy tickets in advance! We’re selling out quickly!! bit.ly/foodchainsdctix
Want to learn more? Write us at: info@dcfairfood.org and get real time updates by attending our Facebook event. 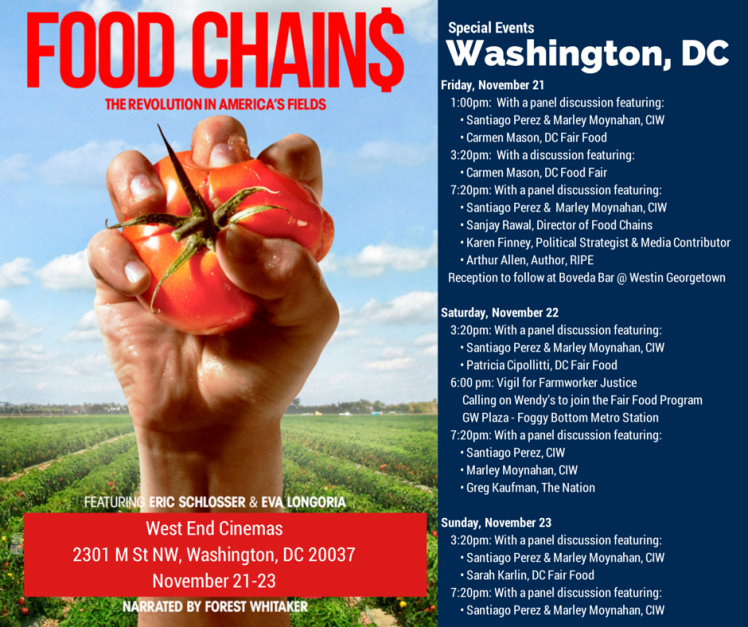