Sign the online petition asking Ahold USA to join with the CIW, and send it to your friends! 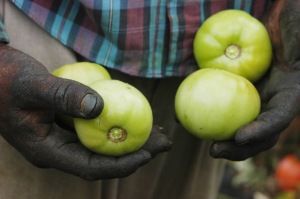 In 1996, after a 17-year-old tomato picker was brutally beaten by his supervisor for stopping to get a drink of water, workers in Immokalee declared at the ensuing protest, “golpear a uno es golpear a todos” — if you beat one of us, you beat all of us.

It’s in that spirit of solidarity we call on D.C. area allies to the Fair Food Campaign to support our petition, to be delivered to Ahold USA on the April 4 Day of Action that is being organized by dozens of student, labor, faith, and civil rights organizations across the country.

On April 4, 1968, Dr. Martin Luther King Jr. was assassinated in Memphis, where he had gone to stand with sanitation workers demanding their dream: The right to bargain collectively for a voice at work and a better life.

Join us in solidarity with working people across the country who are fighting against the right-wing attack and for the rights Dr. King gave his life for: the freedom to bargain, to vote, to afford a college education and justice for all workers.

In this national climate of anti-worker sentiment, it is even more critically important for companies like Ahold to take the lead on businesses that support the families of working America. Join us in calling on Ahold USA, a major supermarket in the United States, to join communities from across the country who affirm an America that lifts up the rights and dignity of all of its workers!

“He who passively accepts evil is as much involved in it as he who helps to perpetrate it.” – Dr. Martin Luther King, Jr.
in solidarity,
the D.C. Fair Food crew
Also, Find an action in your area to join on April 4th!